How to Unblock a Toilet yourself

Averting a smelly disaster is important in anyone’s books, so offering these simple tips on how to unblock a toilet should be kept handy. Who knows when an emergency will strike? Whether it’s the little girls room or the men’s library, a blocked toilet is everybody’s business.

It’s a good idea to determine what’s actually blocking the toilet before going ahead and clearing the way. After all, different blockages need different measures!

Have little ones roaming the house? Quite often, these curious creatures want to find out if what goes down, will in fact come back up. Water is for playtime right? Kiddies quickly learn that when they throw their favourite toy down the toilet, it ain’t coming back up in a hurry. Or else, you could keep the bathroom door closed. 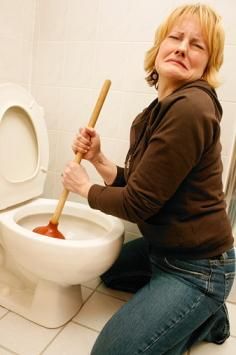 How do you unblock a toilet stuffed with toys? Okay, hopefully it’s not actually stuffed with toys and it’s just a few. (Phew!) Employ the aged old classic: coat hanger trick. Not a party trick, but a clever way of getting things outta there that do not belong.

Just unravel into a very long snake and bend one end into a circular head, then try scooping the toy/s out. Best to tie a bit of fabric at the end to avoid scratching the toilet bowl.

Just when you thought life was easy peasy, handfuls of hair, too much toilet paper or other unmentionables get in the way. As we all know, the throne is a sacred place and should be as clear as a whistle. Having your toilet blocked up and stinky can really cause unforgettable nightmares for everyone in the household.

How to unblock a toilet with any one of these foreign matters you ask? Another classic. You guessed it. The plunger. Not as straightforward as you might think, but great if you have one handy.

Unfortunately, the typical, simple suction cap plunger won’t work as well as a heavy duty one. You’ll be wasting more energy than it’s worth if you’re using the wrong plunger. Afterall, keeping the right plunger on standby is an investment you won’t regret.

I don’t want to deal with a stinky blocked toilet

We don’t blame you. Customers call us everyday when there’s something iffy going on in the private room. We understand it’s not the easiest situation to deal with, and certainly not the most pleasant.

At just $175 with no hidden extras, No Doubt Plumbing will relieve you of any smelly plumbing emergency. No one expects you to know how to unblock a toilet the way we do, that’s why we’re the experts.